Why did I start writing?

I don’t have a good reason. I was shopping for a hobby at the time because I felt myself becoming over-involved with my kids lives and with them getting older I needed to claim a life of my own. I’d tried writing my memoirs a couple time–not for public eyes, just for my kids. After about five pages my own life bored me. 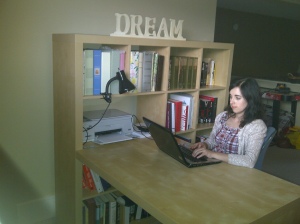 I’d never considered fiction writing until I heard an interview with another writer who talked about how she told herself stories. My first thought was, doesn’t everyone do that? Apparently not. So I decided to give fiction writing a try.

In April of 2009 I opened a fresh Word document and titled it, The First Try. I wrote these words: “In this three dimensional world, four coordinates are required, the fourth being time. For to be in precisely the right position, but even a moment away, changes everything.” I wrote twenty-three pages of that manuscript, then lost interest.  So, I opened another new document and started on another book idea. Five pages in I abandoned that one too.

I didn’t view any of these false starts as failure because I figured I just hadn’t found the right idea and that it would eventually come. One Sunday it came. And once it came there was no abandoning it. I wrote and I wrote. Every spare moment I could find I spent writing. After two months I completed my first novel! Within the year I’d completed the series of three books. By that point, there was no turning back. Whatever you want to call this–a writing bug, an addiction, a fetish, an overactive imagination that is vain enough to demand to be recorded–I have a bad case of it.

To date I’ve completed ten novels, three of which have been edited, critiqued, edited, and edited some more and are being sent out in hopes of a publishing contract. While I search for an agent or publisher willing to take on a new writer–I have work to do. My first New Adult novel is in dire need of editing and the third book in my Solar series is calling.